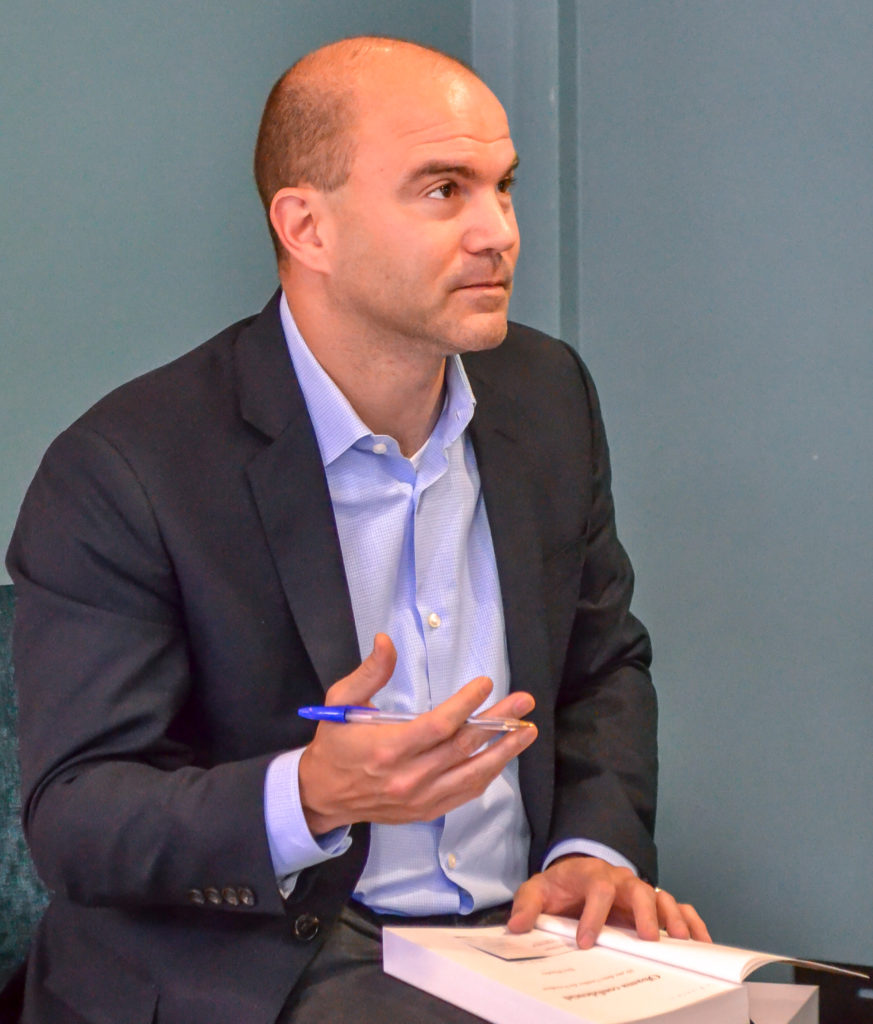 The book, The World as It Is, is now available in French from Editions Saint-Simon under the title Obama Confidentiel

In 2008, Ben Rhodes traveled to Europe with Barack Obama as a 29-year-old campaign speechwriter. Hundreds of thousands gathered on the streets of Berlin to welcome the then-candidate. Rhodes prepared a speech that, in the style of American presidential visits to the city, closed out with a German phrase to excite the crowd. Just hours before the big speech, Rhodes realized that the phrase he had chosen could absolutely not be used – it was the title of one of the first speeches Hitler gave to the Reichstag. When he nervously took this information to Obama, the future president burst into laughter, declaring Rhodes ‘Employee of the Month.’

Telling this story yesterday onstage at AmCham France, in conversation with Jérémie Gallon (Managing Director), Rhodes said that this attitude was telling of Obama’s demeanor. He was a cerebral boss and his good-humored nature motivated his team to take risks.

In the eight years that followed the Berlin trip, Rhodes would grow to be Obama’s close confidant and a main voice in American foreign policy as Deputy National Security Advisor for Communications and Speechwriting. Rhodes was a key architect of both the American rapprochement with Cuba and the Iran Deal. He shared some of his experiences with AmCham members, delving into both his successes and regrets around the Arab Spring and conflict in Libya. This discussion was captivating for all those interested in the legacy of the Obama administration and current geopolitical events. Rhodes brought our audience not only into the room with Barack Obama but into the former president’s thought process. He illustrated that his memoir is also a coming of age story, sharing how he moved from a young idealist on the campaign trail to an experienced foreign policy expert with the weight of world changing decisions on his shoulders.

AmCham’s conversation with Rhodes around his memoir evoked nostalgia for an era when the American president believed in multilateralism and foreign policy was crafted with intellectual heft. It also left the audience asking the same question that Barack Obama and Ben Rhodes reflected on throughout the administration – is America moving slowly towards progress or has it taken a turn that cannot be course corrected? Yesterday, Rhodes told AmCham that he believes the framework of the Obama administration’s policies are still in place, and a future president could potentially rebuild what they started.

These kinds of insights from high level decisionmakers such as Rhodes are integral to AmCham’s ongoing transition to a transatlantic think-tank structure. We will continue the discussion, weighing in on critical economic and geopolitical issues with future guests.

You can read Jérémie Gallon’s (@JeremieGallon) review of Obama Confidentiel featured in Le Figaro here. You can find Ben Rhodes’ memoir here in English and here in French.